Perfectstroke is proud to be a representative of Foresight Sports in Queensland, Australia and we are happy to have interested parties visit our studio on the Gold Coast to see first hand the Foresight GC range of launch monitor systems.

Combined with FSX software the GC Quad is the leading ball and club analysis system in the world and can also be used as a totally mobile unit with its built in LCD output. The Quad can also be connected via wireless to an iPad to provide accurate data on all shots both inside and outside, ideal for teachers and club fitters.

With its four high speed camera system and fast processing speed it is able to provide accurate data on both ball and club by measuring every aspect of ball strike including path, face angle, impact location, angle of attack, lie angle, clubhead and ball speed and much more.

The GC Quad is used by the worlds top teachers, club fitters and players because it provides accurate information on ball flight and club data. Perfectstroke can help you with your own studio designs for home entertainment or golf club instruction use. Feel free to contact us at [email protected] to set up a visit to our studio on the Gold Coast in Queensland to see Foresight products in action. The Foresight GC Quad is the ultimate golf launch monitor and simulator system for inside and outside usage. Trusted by golf’s top teachers and players because of its accuracy with ball and club data and ease of use and coupled with Foresight’s FSX software that includes putting stroke analysis. The Foresight GC2 with HMT provides a four camera system that is able to capture and accurately represent both ball and club data. This system was released in 2013 and for users of GC2 the two camera add on system provides club data essential for instruction at the highest level and for club fitting.

Watch These Videos on the Foresight Products The SAM Puttlab is regarded as the leading analysis software in the world for golf putting. Since it’s release in 2003 it has been used by top coaches and players as well as instructors all around the world to help players of all skill levels improve putting outcomes. Mark Officer and Perfectstroke have been involved with SAM Puttlab and Science and Motion Sports since 2006 after becoming one of Australia’s first locations to put Puttlab into use. We are the leading sales agents in Australia for Science and Motion Sports and the SAM Puttlab and have the experience to be able to advise you on your requirements.

Since 2009 Mark Officer from Perfectstroke has been a representative and consultant at the annual PGA Merchandise Show in Orlando. In October 2017 the first SAM Puttlab Putting Instructor Certification was held at the Perfectstroke Golf Training Centre presented by Mark Officer where seventeen Australian PGA members gained Level One Certification. 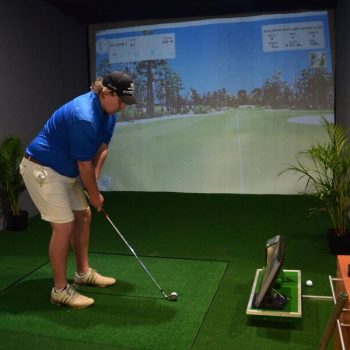 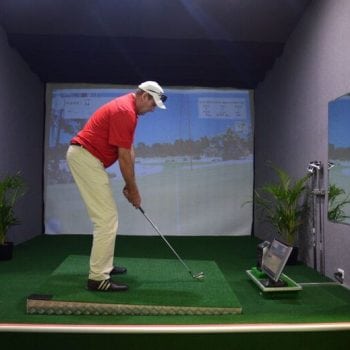 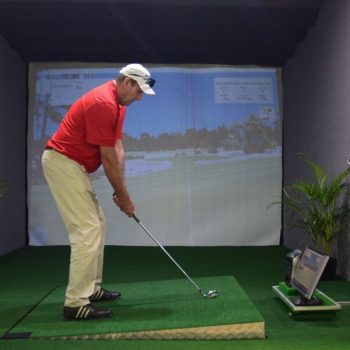 The Perfectstroke Adjustable Hitting Platform is an incredible golf technology that can enable a golf professional to teach more about playing the game on course.

There are almost no golf practice facilities that can provide an area where golfers can practice from sloping lies which are very often encountered on the golf course. Players have to rely on past experience from playing to have an idea on how the ball is going to react from being hit in situations such as ball above feet or a downslope lie.

The platform is electrically adjustable and is recessed into a studio floor to provide golfers with the option of practicing sloping lie fairway and approach shots.

It can be used in conjunction with launch monitor systems including Foresight GC Quad and GC2, Trackman and Flightscope.

It can be set up for a level lie position or adjusted up to 10% at planar angles such as ball above feet or downhill lie or 5% in combination angle such as uphill and ball below feet.

The Perfectstroke Adjustable Hitting Platform is 1500mm x 1500mm and is powered by four electric hydraulic actuators each capable of lifting 1.2 tonnes which can create slopes of 5% in less than 30 seconds. When used with a launch monitor players can gain an understanding of how much slope effects curvature and distance at different angles.

The AHP can also be used by coaches to influence swing path and plane of players such as creating a ball above feet situation for a slicer.

One of the other features of the Perfectstroke Adjustable Hitting Platform is that pressure mat systems such as BodiTrak, SAM Balance Lab and Swing Catalyst force plate can be used with the platform on different slopes to influence things such as centre of pressure trace and correct weight transfer. The platform can provide a perfectly straight putt of up to 12 feet and can also be electrically controlled to simulate breaking putts of the same length at up to 4.5%.

The Perfectstroke Adjustable Putting Platform can be recessed into a floor to provide a putting studio that can be completed with a SAM Puttlab, camera and software analysis system.

The Perfectstroke Adjustable Putting Platform is the solution for state of the art putting instruction, putter sales display area or home entertainment centre.

This is a turnkey solution for providing a dynamic and profitable area for putting instruction, putter sales and fitting. The platform is installed into your facility and is set up to provide a straight putt hit from up to 12 feet. Electrically fully adjustable to provide breaking putts that can be left to right, right to left, uphill or downhill.

We offer a simple control system located either in a panel on the platform or at a central control area which enables the user to move the platform to any desired planar position.

We offer a standard sized platform which is 4.5m x 1.8m and can be positioned in a corner area which can actually help to create more usable space in a putter display or instruction area. We can also customise to your size requirements.

In a dedicated putting instruction area the Adjustable Putting Platform by Perfectstroke is an ideal vehicle to help present highly professional structured lessons including the option to install permanent cameras with video software analysis.

The APP by Perfectstroke has a backboard which displays markings in degrees and inches to serve as aiming points and references for stroke path direction and face alignment. An elevated elastic line is able to be used above the ball on straight and breaking putts to help with putter aim and reference for starting direction. The backboard is customisable for your facility logo or golf club name.

Perfectstroke is also an agent for Science and Motion Sports SAM Puttlab system which can be used to measure players competency on straight putts and in conjunction with the APP breaking putts can also be analysed. We have been designing and building fully actuated golf putting platforms since 2007 and have the experience and knowledge to deliver worlds best practices to you.

For More information about the products in this section, complete the form on the right-hand side to request an information pack.